Our pumpkin collection now numbers eleven. We carved one (the girls named him “Gourdy”…). We shellacked another five during a handful of “paint your own pumpkin” events — two of our more spectacular specimens were decorated with glue and pink sparkles. And five of them are the cute Jack Be Littles that are only 50-cents-a-piece at the farmer’s market. Who, after all, can say “no” to a three-year-old who begins naming them after family members? 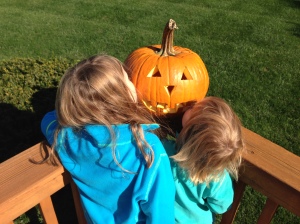 Gourdy gets a kiss or two

Painting our pumpkins…and ourselves

We made a great batch of toasted pumpkin seeds (thank you, Gourdy) that, for once, I didn’t burn. And after we polished those off I began dreaming even more ardently of pumpkin seeds. Specifically, green hulled pumpkin seeds, or pepitas, those meaty little gems that turn up in Mexican molé sauces and few other places north of the border. Our Whole Foods Market sells them by the bag and they are a nice foil to the crunchy ones with the shells on that you toast yourself. 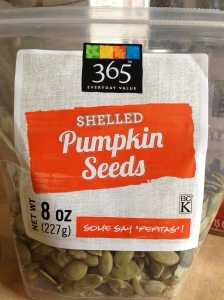 And since I couldn’t leave good enough alone I started to experiment a little bit. One thing led to another and now we have a sweet, crunchy tray of pumpkin seed brittle that we’ll be enjoying on Halloween. This version is dairy-free since we’ll be sharing it with lactose-intolerant friends, replacing the regular butter that goes into a brittle candy with a butter substitute. I started with a Pumpkin-Seed Brittle recipe on Martha Stewart’s web site (though it uses butter) and made a couple of changes to suite our needs and tastes. 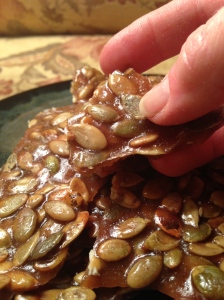 I should probably caution that this is a recipe your kids may want to make with you, but since it involves boiling sugar I strongly caution that you keep them away from the finished brittle until it has hardened. Have them mix the pumpkin seeds with the spices, but leave the rest of the cooking and pouring to an adult. Also, rumor has it that you can use those toasted, un-hulled pumpkin seeds if you like your brittle even crunchier. Or, try this with sunflower seeds, toasted slivered almonds, or toasted pine nuts for a different twist.

Here’s how we made ours:

Begin by lining a baking sheet with a non-stick silicone baking mat (like Silpat) or with a sheet of parchment paper that has been greased with 1 additional teaspoon of the butter substitute. Set aside.

In a medium bowl, mix together the pumpkin seeds, cinnamon, allspice, and a pinch of salt. Toast the mixture over medium heat in a skillet on the stove top. Shake the skillet frequently to keep the seeds from burning. They may pop a bit over the heat so be careful. Toast for approximately 5 minutes, until most seeds have begun to lightly brown and the mixture has a nutty fragrance. Remove from heat.

In a large sauce pan melt the butter substitute and add the brown sugar, honey and vanilla. Bring to a boil and allow to bubble for approximately 6 minutes, until the mixture is a deep golden color and measures 280 degrees on a candy thermometer. Add the pumpkin seeds and, using a heat-proof silicone spatula, mix well. Allow to cook for approximately another 2 minutes, until the mixture reaches 300 degrees on the candy thermometer. The mixture will bubble in the pan and become quite thick.

Carefully pour the pumpkin seed mixture onto the prepared baking sheet, using the silicone spatula to spread the mixture to a thin layer that is about 1 seed thick. Working quickly, sprinkle evenly with another generous pinch or two of flaky sea salt, which will set into the brittle. Add the salt too late and it will just sit on top of the hardened candy.

Cooling the brittle on a Silpat mat

Allow the brittle to cool completely. This will take at least an hour at room temperature. You can move to the refrigerator for faster cooling once the mixture has set a bit but that is not necessary…the brittle will harden on its own outside of the refrigerator.

Break into chunks to serve.

Serves: 6 – 8 (though Martha’s recipe indicates it serves a perhaps more realistic 4…who really, really like brittle).

Parent rating: Yum! Oops, I mean, four and a half stars. This is addicting. At first bite, you realize it’s not like any other candy you’ve had…a little more earthy, nice combination of salty and sweet. And then you go back for another bite. And another.
Kid rating: Very similar reaction. Daughter 1 took a bite and declared she wasn’t sure if she liked it. But an hour later she was back for more. And then more. Daughter 2 liked it from the get-go. They give it four stars.