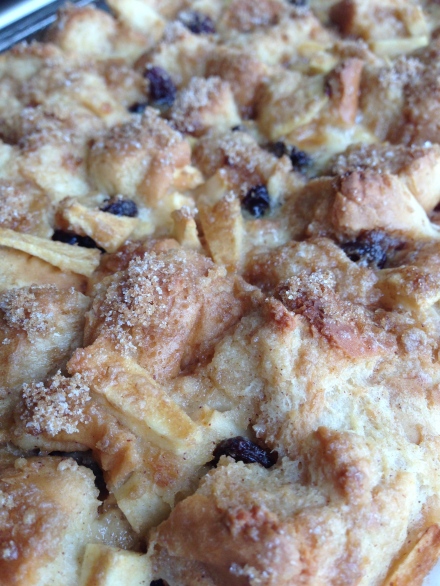 We’re in the thick of winter here in the Northeast United States, though my friends in the Southern states are also bundling up and shoveling out this week. All this unnaturally cold weather calls for a warm remedy in the form of comforting bread pudding.

We last wrote about bread pudding this past summer in our Spanakopita Bread Pudding post. Here we move away from the savory and into the sweet category with a new twist on a breakfast favorite. This version packs in bits of fresh apple and dried cranberries with the more traditional raisins and is quite creamy and moist — almost custard-like in its consistency, making it the perfect way to begin your day. It’s an especially welcome treat on the weekend, served in a shallow bowl with perhaps a drizzle of maple syrup or dollop of sweetened whipped cream. Served as dessert, it would be great with a scoop of vanilla ice cream.

The ingredients coming together

If you’re lucky enough to make this with farm fresh eggs — like the ones we can get from Cherry Grove Farm in Lawrenceville that are sold the same day they’re collected — your bread pudding will be especially rich and flavorful. We amped up the apple flavor with a little bit of cider in this recipe, too. I’m partial to the cider from Terhune Orchards but you should look for something local to your neck of the woods. When we can’t get to Terhune, we’ve been enjoying cider from Country Acres in Waynesboro, PA, which our local Whole Foods carries. It lists one ingredient on the ingredient list: apples. I love that.

For the bread in this recipe you’ll want something firm and white. Leftover sandwich bread is fine (I leave the crusts on, but you can choose to remove them). Challah bread would be even better. It’s OK — preferred even — for it to be a couple of days old. You’re going to dry it out even further for this dish so it can soak up all the eggy, creamy goodness of the batter.

I hope you’ll give this recipe a try. It comes together quickly, makes great use of ingredients you likely have on hand (no going out in PJs to get a last-minute ingredient), and will definitely warm you up on a cold winter morning. Or any time, really.

Adjust baking rack in oven to the middle position and preheat oven to 325 degrees. Distribute bread cubes on a large rimmed baking sheet, making sure cubes are in a single layer. Put baking sheet in oven and bake for 20 minutes, or until the cubes are just dry but haven’t started to toast. Remove the cubes from the oven when done and cool them to room temperature. Do not turn off oven.

Meanwhile, whisk together the eggs, egg yolks, and 1/2 cup sugar in a large mixing bowl until the sugar is well incorporated and the color of the eggs has lightened slightly. Whisk in the half-and-half, milk, cinnamon, vanilla, and apple cider. Add the bread cubes, diced apple, raisins, and cranberries and toss everything well in the batter. The dried bread cubes will quickly soak up the liquid. The fruit should be evenly distributed throughout the dish.

Prepare a 7″ x 11″ Pyrex baking dish (or other 2-quart baking dish) by lightly coating with cooking spray or butter. Transfer the egg/milk/half-and-half/cider/fruit mixture to the baking dish, pouring any liquid remaining in the mixing bowl over the top of the bread cubes. Allow the pudding to sit for another 10 – 15 minutes to make sure the bread has soaked up as much of the liquid as possible.

Mix together the brown sugar and remaining 1 tablespoon granulated sugar and sprinkle this mixture evenly over the top of the pudding.

Place the pudding, in the baking dish, on a clean rimmed baking sheet (to catch drips in case it bubbles over) and bake it at 325 degrees for 50 minutes, or until the center is set but still ever-so-slightly jiggly. A knife inserted in the pudding should come out clean.

Allow to cool for 10 minutes, cut into portions, and serve while still warm. Great on its own, or embellish with maple syrup or a spoonful of whipped cream. Or a drizzle of Crème Anglaise if you happen to have some sitting around!

The eggy pudding waiting to be baked (above) and 50 minutes later, fresh out of the oven (below)

Kid rating: four stars, but this is a split between five stars from Daughter 1 (who very happily cleaned her plate of this bread pudding not just one day, but two days in a row) and three stars from Daughter 2, who just wasn’t as enthusiastic about this sweet version as she was the savory bread pudding we made over the summer. Go figure! (Though my professed love of all things feta might just have rubbed off on her.)
Parent rating: four-and-a-half stars. Both my husband and I had this over several days for breakfast ourselves. It was a great treat on a Saturday morning with a big cup of coffee — the kind of breakfast that prepares you for anything. Including a day spent by the fire, keeping warm, playing card games.

One thought on “Apple-Cinnamon Bread Pudding with Raisins and Cranberries”