The Memorial Day weekend in the United States is the unofficial start of summer. It’s also the weekend that grills across the nation — having lain dormant under feet of winter snow — get dusted off, cleaned out and fired up. If you’re on the hunt for an easy grilling recipe that is both adult and kid-friendly, raises the bar over traditional hamburger and hot dog fare, and takes no more than five minutes to cook once it hits the flame, this is the recipe for you.

Marinating meat does several things to it by adding flavor and tenderizing the meat fibers. But be careful: not all marinades are created equal. Here are some of the things we’ve learned along the way that you’ll need to be aware of when marinating meat (check out the subscription site Cook’s Illustrated for great scientific explanations of what happens during the marinating process):

This particular recipe uses highly-acidic lemon juice in combination with salt to quickly tenderize and brine the outer surface of some thinly-cut chicken breasts. The olive oil and garlic, in combination with the citrus flavor of the lemon juice, then works its way into the chicken. These chicken breasts are very tender and flavorful as a result, the perfect complement to a Memorial Day spread. 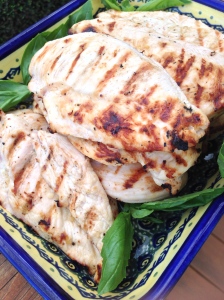 The Stout Sprouts helped me make this ridiculously simple marinade, into which we placed chicken breasts that had been sliced in half horizontally to keep them thin (which, in addition to allowing them to cook quickly, increased the surface area vs. a full chicken breast so that the marinade worked better). After sitting in the marinade for an hour, it only took four minutes of grilling over a hot flame — two minutes per side — and the chicken breasts were ready.

This is a great recipe for kids, from squeezing lemons to measuring salt

We served ours with brown rice and a tomato/mozzarella/basil salad, but these are great with any number of side dishes, or even sandwiched in a crusty roll with some mayo and greens.

I hope you’ll give this recipe a try, especially if you’re still searching for a quick Memorial Day meal. It’s versatile, yummy, and got a big thumbs up from both our Sprouts. I hope your sprouts feel the same way. Happy grilling! 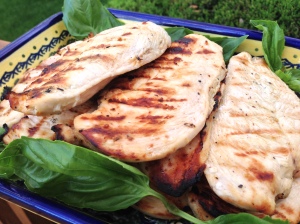 Ingredients:
Juice from 2 large lemons
4 garlic cloves, finely minced or run through a garlic press
2 teaspoons Kosher salt
1/4 cup olive oil
Several grinds freshly-ground black pepper
3 whole chicken breasts, split into 6 individual breasts, and then each individual breast sliced in half horizontally to create 12 breast cutlets. Try to get an even thickness to each breast, pounding any chicken breasts with an uneven thickness between two layers of wax paper until they are even.

Combine the lemon juice, garlic, salt and olive oil in a large mixing bowl. Whisk well. Add the chicken breasts to the marinade and coat well. Cover and place the mixing bowl in the refrigerator and allow to marinate at least 30 minutes but not more than 90 minutes.

Prepare your charcoal or gas grill for direct grilling. As we mentioned on last year’s Hickory-Smoked Chicken Thighs and Drumsticks post, Steven Reichlen’s Barbecue University® website has a great explanation of direct vs. indirect grilling, and it is the site we turn to most often for grilling techniques and tips. For this recipe, you’ll want a three-zone fire with a hot zone, a medium zone, and a cooler zone onto which to move any chicken breasts that are cooking quite quickly.

Allow the grill to heat to a temperature of between 400 degrees F and no more than 450 degrees F. Once the grill has reached this temperature, clean the grilling grate well with a wire brush and oil it with vegetable oil (dip a paper towel “mop” held with a set of long tongs into some vegetable oil and brush the mop across the grill grate several times) to prevent the chicken breasts from sticking.

Serves: 6 – 10, depending on the size of your chicken breasts and the appetites of your family (serve 1 – 2 cutlets per person). 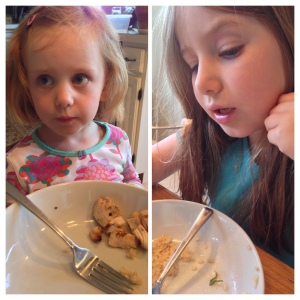 Kid rating: five stars. The Stout Sprouts like chicken, and Daughter 1 says this is her favorite recipe for chicken on the grill. Daughter 2, seeing the photos I was preparing for this blog post, asked me to make this recipe again because she “loves it.” Yea! Both our Sprouts cleared their plates on the consecutive nights we served it. Grilled lemon garlic chicken breasts are tender and extremely flavorful, but still approachable with familiar kid-friendly ingredients.
Parent rating: four and a half stars. This is fast and easy and feeds a crowd, but even when you’re not cooking for a houseful of people, leftovers are great. We served our chicken with brown rice and a tomato and mozzarella salad, and leftover chicken breasts found their way into chicken burritos, so you get a feeling for how versatile this recipe can be. It cooks so quickly that, if you’re making this for a barbecue, it won’t take you away from the party for very long…a definite bonus in my book.